Living and working from a van-home

Hubert (pronounced U-Bear) is holding his breakfast dishes and standing next to his Ural 2WD sidecar motorcycle.

He has ridden a sidecar around the world – Arctic Circle, the Americas, the Middle East, Africa, India (the list goes on) – for twelve years.

Ever since an incident with an incredible, life-changing cucumber salad while dining with his friend Jean-Louis. But more on that in a moment.

We’re at the top of the South Island in New Zealand. Hubert approaches my campervan while we’re both camped in Collingwood, Golden Bay. It’s the last major town (population 235) before the road tapers into a narrow 26km long sand bank, Farewell Spit. Where seal pups learn to swim and where suicidal (or confused?) whales beach themselves in large numbers frequently.

Hubert introduces himself and stops to admire my campervan’s antique dresser I picked up from a charity store a few weeks earlier. Hubert’s French, it figures.

His glasses are bold and round and an unforgettable deep acrylic red. He has an old, severe-looking scar brimming from under his chin, running down his chest. I don’t ask.

He tells me about his wife Lorraine who has a campervan a little bigger than mine, but just as unconventional. He says she’d like my dresser.

But back to the cucumber salad.

It’s November 2005, in l’Orange Bleu, Manhattan. Hubert’s friend Jean-Louis laments between mouthfuls of cucumber, “When we live in a big city like New York, on December 31 our pockets are empty because we spend it all.”

They move onto the couscous.

Jean-Louis asks Hubert a question (best imagined in a French accent), “Now that your younger daughter Jessica is finishing her college, what are you going to do?” He’d never considered his answer before now.

As they talked, Hubert and Jean-Louis established that if he were to sell everything he had, he’d have enough money to travel with his sidecar for ten years.

It was a common sense decision, says Hubert, that he took while drinking his coffee.

It’s been twelve years on the road now. In 2008, Hubert discovered some retirement money he was entitled to from France and the USA. He has no plan or reason to stop now.

Parked in my new campsite later that evening, I examine the black and white printed business card he gave me. The timeless ride dot com. Goodbye evening. 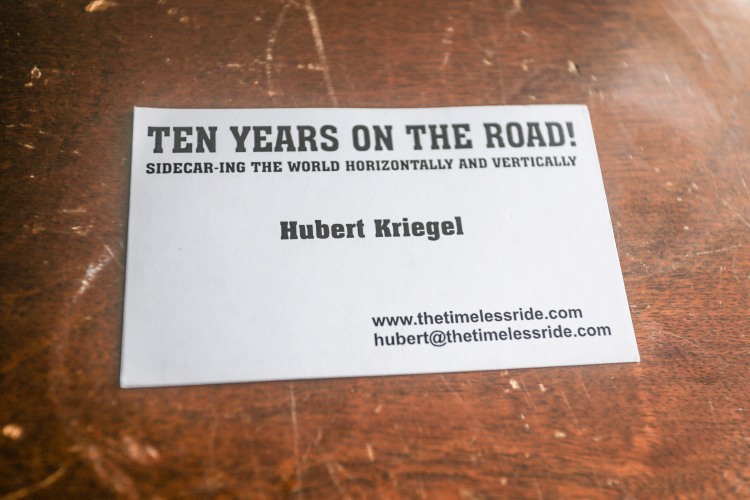 Hubert’s website appears to be a series of lovingly hand-coded html pages. I can almost smell 2005.

“Warning: You are entering this web site at your own risk. Danger of contagion!!!” Choose from over 52 languages. “New to the site? Start here.” I click.

“Who is Hubert?” A link with a French accent jumps off the page at me. “Open it if you dare to know the truth.” I click again.

“Click on the photo if you can handle the truth!!!” I can handle it Hubert! I’m hooked.

I have the choice to find out even more about Hubert by date, by occupation, by sidecar, by support team, by philosophy, by favourite photos, by the “most” rides and by Q&A.

Hubert was born and raised in Paris where he lived for 37 years. He moved to Los Angeles and then to New York. He’s been married 3 times, he has 3 daughters and held numerous occupations including real estate broker, sidecar messenger and owner of a graphic design business.

When he upgraded to his current Ural 2WD sidecar in 2008, Hubert gifted his original BMW motorbike and Ural sidecar to his younger daughter Jessica. She drives it daily around California.

His blog is a colourful photo journal, captioning his adventures and the people he meets along the way.

But I’ll describe him no more.

Hubert is best discovered through his own information architecture, caption craft and exclamation marks. This is one French rabbit hole you will want to go down. You’re welcome.

We exchange emails. I tell him he’s an inspiration. He thanks me for my photograph and sends me pictures of his wife’s campervan. He tells me he’s already published a photo of my partner and I and our antique dresser in his Golden Bay collection.

He signs off his email, “Don’t forget to take a risk today.”

You can support Hubert by contributing a gallon of gas, or write about him on his own website in his guest book:”write it all, don’t withhold anything!”.

A kitchen, a bathroom, a bedroom and a… baby 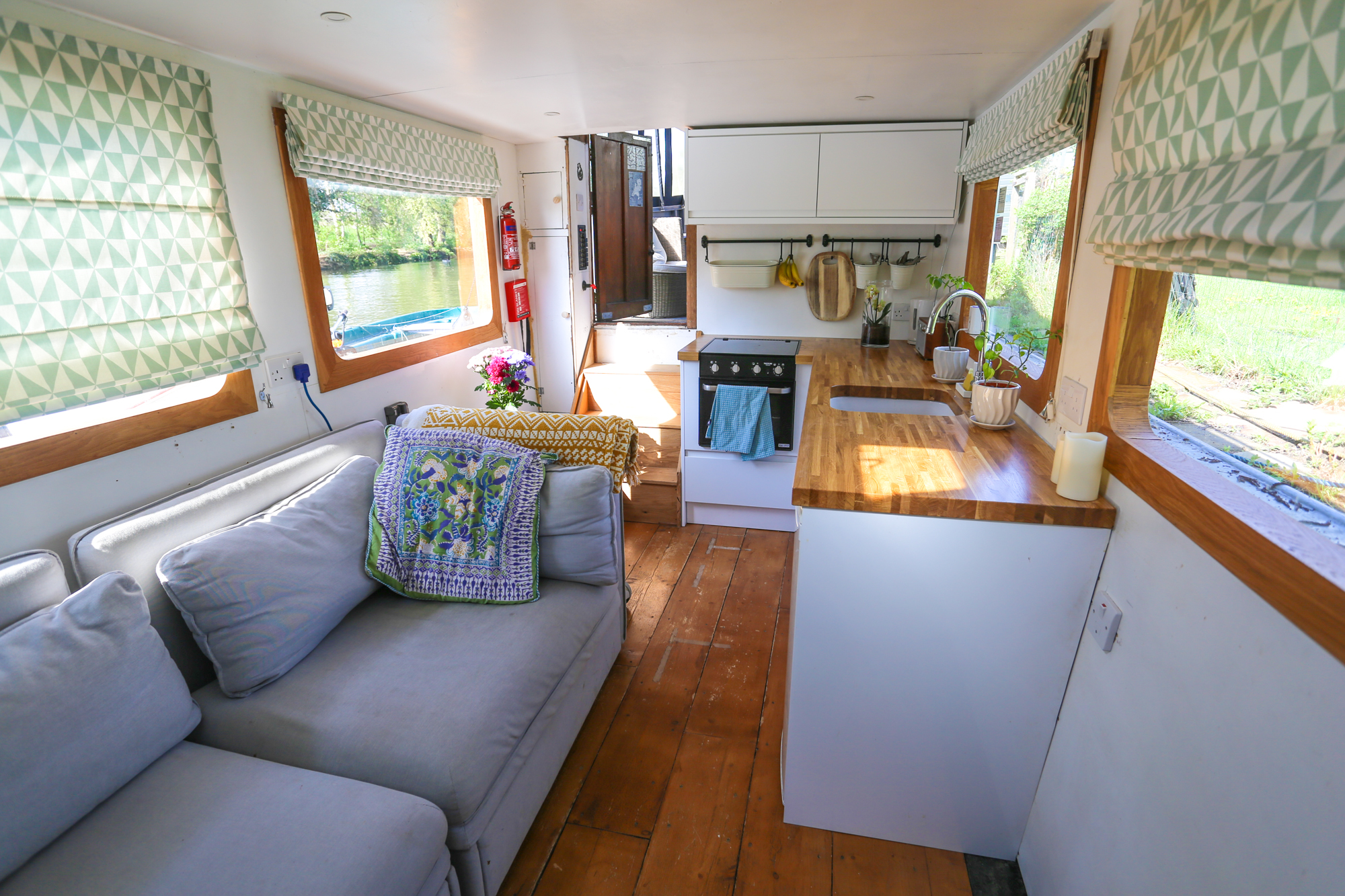 We now have a new kitchen with actual storage (hooray!), a bathroom with room to spread one’s arms out (incredible! – for a boat) and a new bedroom with an actual bed and storage (whoo hoo!). Oh yeah, and we’re expecting a baby in approximately a week and a bit (eeeeep!).

A wheelhouse in a day and a bedroom in a… year?

If you’ve been following along with our boat renovation adventures, you won’t be surprised to learn that Odin’s fit-out out is taking us longer than anticipated. Usual story.

You’d be forgiven for thinking we were still docked at the boat yard battling a major boativation issue, it’s been that long since I’ve written an update. But you’re wrong. We moved back aboard Odin 2 months after leaving her at the boat yard, 1 month later than planned and exactly 1 year to the […]

It gets worse before it gets better

“It gets worse before it gets better,” said Luke from the boat yard as we wandered over to the water’s edge. I stared down into a massive hole in the back deck of our floating home. It’s a huge new access point for the engine, batteries and water tanks. It’s the first step towards making […]

Goslings, pigeon poops and a first journey under our own steam

It’s July and that means we’ve now reached 10 months of boat ownership and 7 months of liveaboardship. To mark these inauspicious occasions, I’ll share some details and ramblings about our river life, close-up. It’s also an excuse to share some pics from my new 85mm lens, truth be told. The gosling (alarm clock) During March, […]